Happy Retirement to a Great Player!

Today we wish a happy retirement to a cornerstone of the Major Command team,

Th-child Posted his Official Announcement in the Forum:
Click Here To Read It

th-child has dominated the top of the scoreboard for countless months, and was an integral part of Major Command, both in front and behind the scenes. If anyone has ever played against him, you would know that th-child and dorcee were an unstoppable team.

I know I got my butt kicked by them many times!!

My Pitiful Record Against th-child! 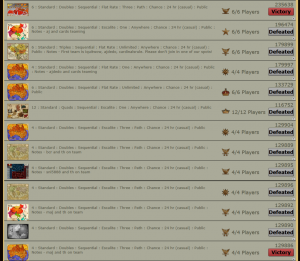 th-child joined Major Command a couple years before I became Sheriff. He had already been made an Admin staff member by Badorties before I came aboard, and was actively chasing down cheaters, keeping order in the forum, and generally making sure everyone was having a fun time…. and he did it all with a smile!

Despite the occasional troublemaking by disgruntled players, th-child always took care of business in a calm and collective manner. Which was an inspiration to watch when I felt myself beginning to lose my cool. And my guess is that his rational temperament, along with a keen sense of strategy, is possibly the key to winning all those games!

There will definately be a void felt in the Admin side of Major Command, and a void in the gaming side too… which leaves an opportunity for someone else to claim the rank of MajorCommander!

You can post your thoughts to th-child in several ways:

Now only a couple questions remain….

Take care and have fun in whatever you do, and hope to see you soon again!!