Star Wars Risk 2015 – I sure hope you’re in the mood for something fun, because we’ve discovered Hasbro has released a board game to complement their release of the latest Star Wars movie. In the hype for the movie itself I missed the board game, but a friend pointed it out to me, so it’s time to have a look at it and see if it’s any good.

First of all, there are two editions of Risk Star Wars on the market. Well, actually three if you consider the Star Wars Original Trilogy Edition which we reviewed a couple months ago. But right now we’re strictly speaking about the Star Wars 2015 edition in this article, and there are two variants. There is the regular pack, and the Black Edition. The difference between the two is the box art, as well as some of the miniatures – capital ships, death star and Millennium Falcon, are cardboard cutouts in the regular version, while they are detailed miniatures in Black Edition. The game rules are a bit more detailed and refined in Black Edition as well, avoiding some potential confusion (although you can find the rules online). 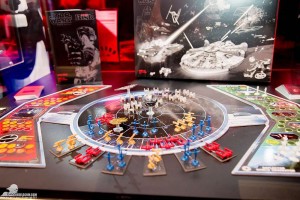 Let’s start with the box art. The main box boasts Kylo Ren in the corner, but that’s a marketing ploy that obscures the fact that the game is actually set in Return of the Jedi, you’re re-creating the Battle of Endor and the dogfight that finalizes with the destruction of Death Star. The game map itself is divided into neat sub-sections that represent each part of the fight for the Death Star. Its X-Wing shape represents the parts of the battle, with wings being their separate fights and center part being the space fight around the Death Star.

The game is designed for two players, although it can be played in two teams. The Rebellion and the Empire clash off around the Death Star, with Empire trying to wipe out the attacking fleet and the rebels trying to bring down the Death Star shields before blowing it up. The winning condition seems simple enough. Center part of the map is probably why the game carries “Risk” name at all, as the mechanics and the overall style of the game, have very little to do with your classic Risk. The space around Death Star is divided into sectors that you can navigate through, moving your squadrons out of the fire’s way and attacking the opponent ships. Dogfight is very simple, you use the number of dice equal to the number of the number of ships on the field you are attacking from and compare against the difficulty to destroy the defending ships – Rebels have more ships but they’re easier to destroy, while the Empire has fewer ships per squadron but are harder to defeat. The rebels must hold a space next to the Death Star when the shields go down and then roll a 6 on the attack to blow it up, while the Star itself can fire back once its shields are down and wipe out everything in the field it fires on. How do the shields go down? Well, that’s what the left side of the map is for. It represents the Battle of Endor, with rebels slowly climbing the progress tracker and Empire trying to slow down their progress by throwing stormtroopers in their way. The progress becomes more difficult higher the progress tracker is, but the fight is generally in favor of the Rebels (unless they roll their dice really poorly). 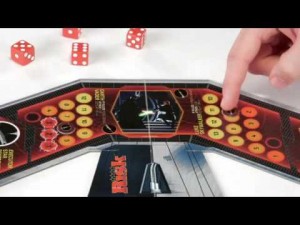 The right side of the map is fully optional, with objectives that can bring advantage to one side or another. It represents the fight between the Luke Skywalker and Darth Vader, with them exchanging lightsaber swings and powers until one of them keels over, with an additional option of redeeming the Vader instead of flat-out killing him that brings even greater benefits.

The players take turns drawing cards which represent “orders”, each card letting you select from one of the several listed orders. For each turn, you select three of the card and select orders from them to be executed. Winning optional objectives allows for bigger card pool to select from or more orders to be executed. The games last for about 40 minutes to an hour, which may sound like a short time but remember, this is a 2 player game only. There’s plenty of decision making and strategizing to go around to keep you occupied for the most of the time, there were no complaints of the game growing boring. That being said, I wouldn’t call this a Risk game, and I’m really stumped as to why would they brand it as such when it could have been a pretty fun game to play on its own. It’s far from a Risk re-skin I expected when I first laid my eyes on the box, but with the different shape of the map, different goals and overall turn mechanic, only the center of the map makes this a risk game, and that’s only nominally. It’s a good game, for sure, but not a good Risk game, so if you feel like going out of your comfort zone and you’re a fan of Star Wars franchise, this is a good game to try. Otherwise, playing Risk online at Major Command is always a solid choice!

Some people ask about prices, so I’ve added a link to Amazon.
Remember to look for used versions. Some as low a $16.