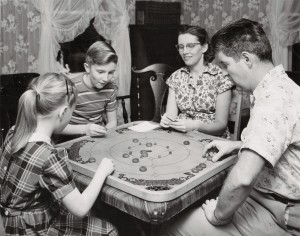 Only a game… Many of us fondly remember those long hours spent playing those wonderful board games as a child. Sure, there were moments when we went savage about who gets what color or marker and most assuredly someone always probably cheated somehow. But we learned things as we played like cooperation, sharing, and sportsmanship. We also felt the thrill of winning and the crush of defeat. Most likely it was then that we first heard someone, probably Dad, say “hey, it’s only a game“.

Who doesn’t remember those young adult years spent chasing wine, women and song while really anticipating the next 27-hour board game marathon where the levels of testosterone were matched only by the mountainous pile of empty beer cans? All the while we were learning about comradery, establishing friendships, often for a lifetime, as we mostly stumbled our way to responsible adulthood. Meh, pass me a cold one since ‘hey, it’s only a game“.

As jobs became careers, girlfriends became wives and children followed seemingly too soon, we often lacked any spare time and struggled to keep the boat steady and on the course. Somehow we and the kids managed to play a few games even as the board games morphed into an ever-changing digital mystery to us. Did we give enough of ourselves? Sadly, after too many excuses, we all heard “it’s ok, Daddy”, “hey, it’s only a game”. Comes to the worldwide networks gushing an explosion of connected and online goodness. For the aging gamer, it appears as manna from heaven. Once again discovering the games of our youth while meeting people from all over the Earth on sites like the awesome MAJORCOMMAND.COM all while sitting in our most comfy chair. Total bliss? hmmm. My adorable grandson asked me just the other day, “Papa, why you yelling at your ‘puter?”. Slightly embarrassed, I realized that after all these years I could still learn about myself and my dealings with those around me. Laughing in the way young children do, I can just imagine him saying “Papa”, “hey, it’s only a game“.