If you are reading this, then you already know about all the various online RISK game options. But when it comes to a challenging Risk board game, RISK: Godstorm holds a very high position on any list of RISK games, and for good reason too! Here’s a strategy game that has only 5 “turns” and yet shows complexity many other games can’t reach.

If you are not familiar with RISK: GODSTORM, then read our game review first!

Once you’ve read our review, then continue on with this RISK: GODSTORM strategy guide!

So, how exactly do you come up ahead during a Risk Godstorm battle? How do you assure your triumph (and potentially lose a few friends in the process)? Godstorm allows you several different playstyles, and they can be defined by the Gods you can summon and control in the game. From my experience with my gaming group the two playstyle sets most commonly used, aggressive and reactive, have excellent chances of bringing you to the end of the game successfully. 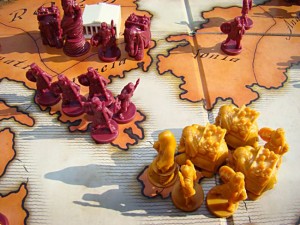 I’ll start with the explanation of the offensive tactics because they are considered stronger, but that doesn’t mean the other approach to the game is inefficient. This method is the least costly when it comes to faith (in-game currency that is used for summoning gods, purchase and activation of their miracles and bidding) because everybody starts with the God of War already summoned, so you don’t need to expand resources on getting him on the board. 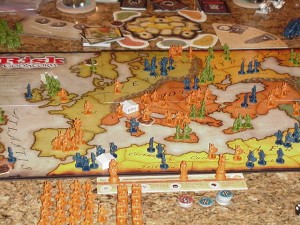 You can play the game with no other God joining your side other than the God of War, but you should consider getting at least one more God for your defending army. His passive power is extremely potent – when attacking with GoW, he counts any draws as a victory for himself, instead as a loss. The difference is critical, especially since this god is often used to attack large stacks of units and break enemy armies.

What you want to be doing is focus on securing a major continent asap. Europe is too hard to hold, but Africa or Asia can be conquered and held with relative ease (especially if you already have a majority of territories somewhere, and plague token has been merciful enough to block one of the approaches to the continent).

Fulfilling this god’s mission is easy, that brings you one miracle card, and if you decide not to summon another God in first few turns, you can focus on getting absolute military dominance on board, since his miracles are cheap to cast and are mostly used to swing fights in your favor. Prevent enemies from taking a continent, make an ally of someone who borders you but holds a weaker continent. Expect to be backstabbed around turn 3. 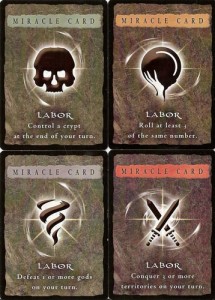 I find this strategy most fun, but is a bit riskier as you need to make two different attacking armies – you won’t stack it all on God of War. This makes both of your offensive gods slightly weaker, but you still want to try and fulfill GoW’s quest to get his miracle card as well as use God of Death to eliminate your opponent’s presence on the map.

God of Death passive removes any units killed in battle with him from the game instead of sending it to the Underworld. Your losses from both of your attacking armies end up downstairs, which would usually not be a good thing, but if you can keep the enemies away from relics and portals in the Underworld, you can keep bringing them back in the game with minimal effort. You want to be building another temple as soon as possible, to be able to provide reinforcements around the map.

Playing this way will leave you starved for faith, and if you lose a God, you will be sorely pressed to get back in the game. Keep him away from God of Wind, and try to invest in Death miracles. They are expensive to enact, but they are extremely potent, with the ability to place additional plague tokens or strike the largest armies in half – you will not be a popular player if you are using God of Death. If you have the ability to sink Atlantis, feel free to move in there and make yourself home, or try to lure someone to bring their army there, so you can drown them.

You will rarely be playing first, as Faith will be scarce, so you will need to plan your moves carefully. 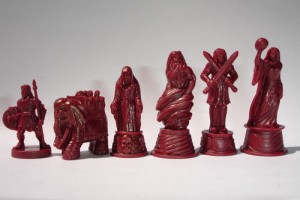 I planned to call this “defensive” section at first, but that doesn’t apply here – it’s still a risk game and you want to be attacking even if you don’t plan to be hyper aggressive. Goddess of Magic and God of Air have miracles and abilities that can remove the advantages other people may want to use against you and to make themselves as a less attractive target. I’ve never been a fan of these tactics, but I can’t deny they’re effective – I prefer going head on against another aggressive god then having to wonder what kind of ace do the reactive players have up their sleeves if I attack them. 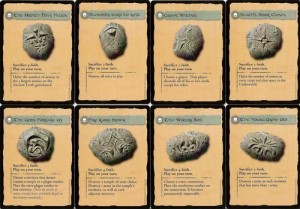 If you want to live and let live as much as possible and want to give yourself best odds in defense, Goddess of Magic is a pretty solid choice. Her ability allows you to reroll any 1’s when she attacks or defends increases the odds of you defending successfully, and she’s got handy relics that increase Faith gain or reduce your Faith losses, leaving you more resources to dedicate to buying War miracles or building additional temples. Her relics are active even if she perishes, as they are permanent bonuses. You want to hold up on a continent with a choke point and prevent anyone from invading you while slowly securing yourself more territories. Try to avoid fighting against God of War, and try to have too large armies for God of Death to consider attacking you. You will make yourself less attractive target, and will be left alone. 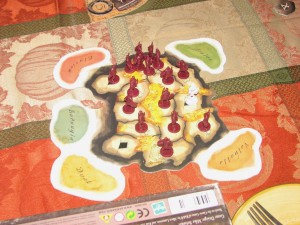 Displacement, deception, and subterfuge are characteristics of God of Air, and he fulfills his purpose rather well. This guy is all about turning the Godstorm game into a regular Risk game by running around and removing other player’s Gods from the map. You want to identify where the opponent’s vectors of attack are, what they plan to conquer and place your god and army near, but not too near. You also want to play after your intended target, so don’t spend too much Faith (if any) bidding during play order phase. When your victim attacks his goals (sustaining his losses in the process) you want to be two easily conquerable regions away, charging in and deleting the God from the map.

This places other players in a deadlock – do they risk go after their intended targets with you nearby or do they turn against you and lose armies in fights that won’t bring them bonuses they want so they win after the 5th turn. If you manage to remove a God from the game do they re-summon him so they can use his miracles, or do they cut their losses and try to win in another manner. The advantages God of Air has when attacking other gods can be overwhelming, and a large number of troops the enemy have can quickly turn into massive army losses with Air miracles, but you do need to read other people so you can undermine them at the right time.

Do not fall into the trap of overinvesting in God of Air; he’s good for God fights only, you will still need to have your God of War conquering for you. 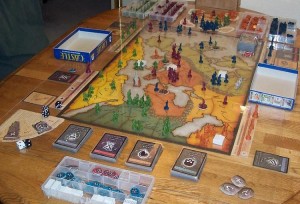 These four guide show how Aggressive and Reactive strategies work, pick the one that suits you the best and have a good game! What did you know about Risk Godstorm?

Some people ask about prices, so I’ve added a link to Amazon.
This one is a lot cheaper then the $500 price tag for RISK: Black Ops!