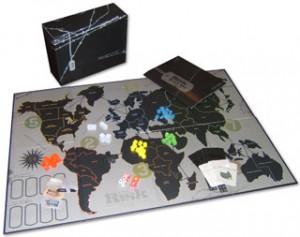 Risk: Black Ops – We all love to play RISK online, but when it came out in 2008, Risk: Black Ops became unique a template for newer Risk variants that may have needed something more going for them. The classic Risk game came out during the late 1950s, so it can’t be denied by many that an overhaul or at least some sort of revision is necessary for the game to stay relevant. Besides the obvious answer of playing Risk online like you would here with the Major Command game version, the face-to-face board game answer is that Risk: Black Ops, which came out just in time in the franchise’s 50th year, provides well as a template for the newer Risk game versions that followed.

It should be noted that Risk: Black Ops is a Limited Edition game. Hasbro only produced 1,000 copies making it extremely pricey for collectors to get a hold of. Adding to the scarcity was that many of the games were distributing to bloggers, reviewers, and gaming sites.

After decades of being pretty much the best-known strategy board game out there, Risk needed a bit of a change in order to stay fresh in an Internet-dominated world and garner the attention of younger generations. Designers came up with some additions and changes that made games shorter and more engaging for more people in more occasions. What they came up with does work towards that end and is indeed interesting. 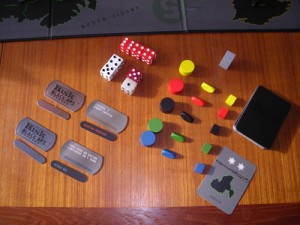 It may have been for a limited release, but Risk: Black Ops was quite the shake-up as far as being a departure from the classic Risk game goes. Its biggest change is the introduction of Objectives in place of the usual Global Domination gameplay.

While you can still play Global Domination like in classic Risk game if you wish to do so, you now have another victory condition to play for in place of taking over all the territories in order to win. This makes for faster games, which is a good thing since it’s not uncommon for classic Risk games to last a whole night and into the wee hours of the morning.

The addition of Objectives makes for more dynamic gameplay and greater strategic and tactical variation. Global Domination usually takes 4 hours or more, especially with a full table, while Objectives requires much less. This means that players won’t get worn out after just one game and they could play another one if they so wish.

This new game format also enables more comebacks to be possible, so players who have the advantage at the moment can’t just sit on their lead by turtling up their defenses. Everyone has to be somewhat aggressive in order to capture the objectives before opponents can or perhaps foil their plans to enact yours. 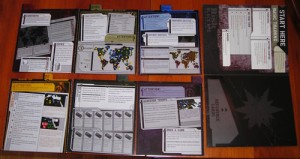 Risk: Black Ops is for 3-5 players instead of the usual maximum of 6 players. It makes use of the same map as classic Risk, although with a more modern theme. That map accommodates 4 major objectives and 4 minor objectives that the players will fight over. The first to get 3 objectives wins the game.

Each player gets a Capital, and they then draw 15 territory cards at random. These determine how reinforcements are distributed, as well as objectives. The 15 territories drawn are to be designated as Cities, after which the cards are shuffled back into the deck. Capturing a Capital gives extra reinforcements, and territories with a city count of 2 also give extra troops.

Once Capitals and Cities have been assigned, players get their troops by counting the values of the territories they picked to control at the start of the game. It’s a bit similar to how troops are drafted in classic Risk, but territories hold a lot more sway in how many each player gets. Once they get the troops, the first player to start the game is picked by whatever means deemed appropriate, and the game proceeds.

During the game, players may acquire objectives during their attack phases, at the end of which they get the reward as indicated. They can even get two or more at one time, in which case that player must choose between them. Since objectives can give rewards that can give an incredible advantage, only one can be taken per turn to keep things fair. 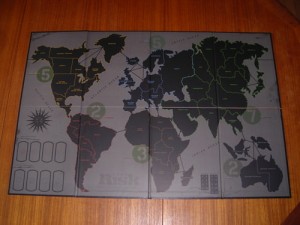 From how things went from there, it seems that what Risk: Black Ops started did take hold on more modern Risk games. Some fans may think that it’s dumbing the game down, but what it really did was make it a lot more accessible to more players in a lot more occasions.

At least with this updated format, you won’t look at that Risk game on your shelf with a pang of dread due to the prospect of going through up to 6 hours of intensity. That indeed makes Risk: Black Ops and its successors more welcome in just about any game library.

Some people ask about prices, so I looked for this Risk board game online
and saw one on Amazon for $1063! That is CRAZY!
I found another one that is a lot more “affordable” at $421.
So hurry up and grab it if you have the cash and are a collector.
I guess that’s what happens when a game is limited to only 1000 copies.
Remember to check for used ones when you look around. Things change.