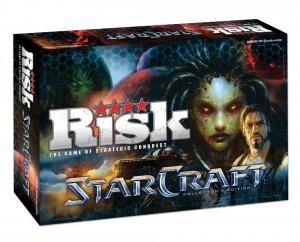 Risk StarCraft Strategy Game – Whether you’re an enthusiast of either board games, video games, or even addicted to playing Risk online against a different opponent everyday, the strategy game genre has pretty much been a constant throughout the years. However, it’s not often that we see a strategy game from one medium jump to another, and that’s pretty much what happened with Risk StarCraft—two world-famous franchises combined in one board game.

It’s nothing new for Risk as variations and adaptations for it are everywhere at this point. This one was released by USAopoly on October 10, 2012, to a good bit of publicity, putting together Blizzard Entertainment’s beloved StarCraft franchise with the tabletop strategy of Risk. Moreover, this combines the original game from 1998 with the newer StarCraft II of 2010, thus being a more consolidated experience fit for fans of the series.

StarCraft Transition From PC to Board Game 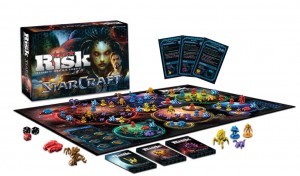 Taking a computer strategy game like StarCraft and putting it into a board game format can be rather challenging, and some may even think it’s ill-advised, but it was made possible here in Risk StarCraft strategy game. This game is designed for 2 to 6 players and with three distinct gameplay modes, making for a fairly diverse gaming experience that can be shared with friends. There aren’t a lot of board games out there that have different gameplay modes, so this is a good way to try it out.

Similar to the computer game, you have a choice of three races, namely the Terran, Protoss, and Zerg. They have their own strengths and weaknesses that are familiar to the fans of Risk StarCraft strategy game. Terrans are humans with guns, tanks, and flying buildings; the Protoss are aliens with super advanced technology; the Zerg are insect-like and can multiply in great numbers to swarm their foes.

Upon the foundations of classic Risk are additions and changes meant to get as close to the complex and dynamic gameplay of Star Craft as possible. You have planets instead of countries and sectors instead of continents to illustrate both the lore and scale of the StarCraft universe. In some of them, you can get mineral fields for rewards to help you along.

There are two hero units for every race who are major characters in StarCraft II. For the Terrans, there’s the rebel leader Jim Raynor and the new emperor Valerian Mengsk; for the Protoss, there’s the hierarch Artanis and the old but still capable Zeratul; for the Zerg, the Queen of Blades Kerrigan and her underlying Zagara. They all have unique abilities that can help with supporting regular units and directly damaging enemy forces, furthering your struggle for dominance. 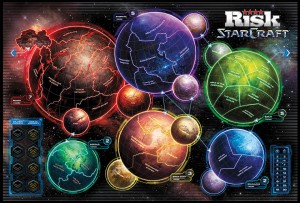 There is a lot more involved in this game compared to classic Risk, which is kind of similar to the real StarCraft. Having more things to juggle all at once adds more dynamism to the gameplay, making it a more interesting experience. The selling point of being a board game in a space setting of an existing franchise isn’t the only thing going for this game, but it doesn’t hurt that it has the visual design and in-game universe that Star Craft has. This board game having the same depth in strategy would be what takes it even further.

However, it may be more than just a handful for most beginners, especially those who are not familiar with either classic Risk or StarCraft (and even so if it’s both). There are some things that some may find less than desirable in this game, like the random placement of mineral fields that can’t be planned for prior to a game. There are also some problems with unit team colors, like how Protoss pieces have yellow and orange units that seem to look alike. 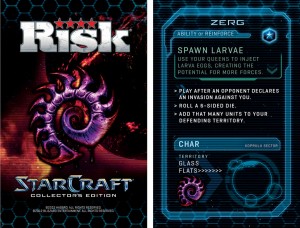 Other than that, it plays well enough as a Risk board game. While the settings are indeed different, much of the logic behind the board is fairly similar. The worlds in this game are distinct, with a different number of entry points between each and various other elements that offer more contrast. Some worlds are easier to take than others, and some have more risk in being controlled at certain times in the game.

You also have achievements and rewards to keep you busy in between world invasions and defensive actions against other players. With 6 players spread throughout the board, things can indeed get chaotic and wild, which is indeed what this game was designed for. 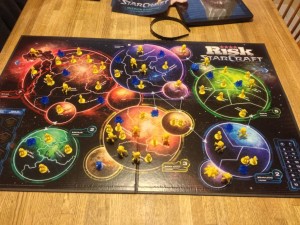 Overall build quality of the unit pieces is quite alright, although the colors may not be the most ideal. The design of the board and cards are well-done, sizable, and fairly comprehensible, which should save players from confusion. While big enough to be substantial, the materials aren’t too big as to take up too much space on the table. As for the visuals, they’re mostly straight out of the Star Craft game, thus they give this game a distinct look and feel that sets it apart from other Risk games, making it a good addition to any Risk and/or tabletop game library.

If you like the idea of a Risk game in a space setting, then Risk StarCraft may just be what you’re looking for. It may be a familiar setting with a lot of gamers out there, making it an attractive addition to a beloved fandom. While it’s far from perfect, it still accomplishes what its designers set out to do by combining two popular strategy game franchises into one package that can be enjoyed by a group of gamers.

Some people asked about price, so I’ve added a link to Amazon.
Post Views: 3,644