Review by By Chris Yeoh 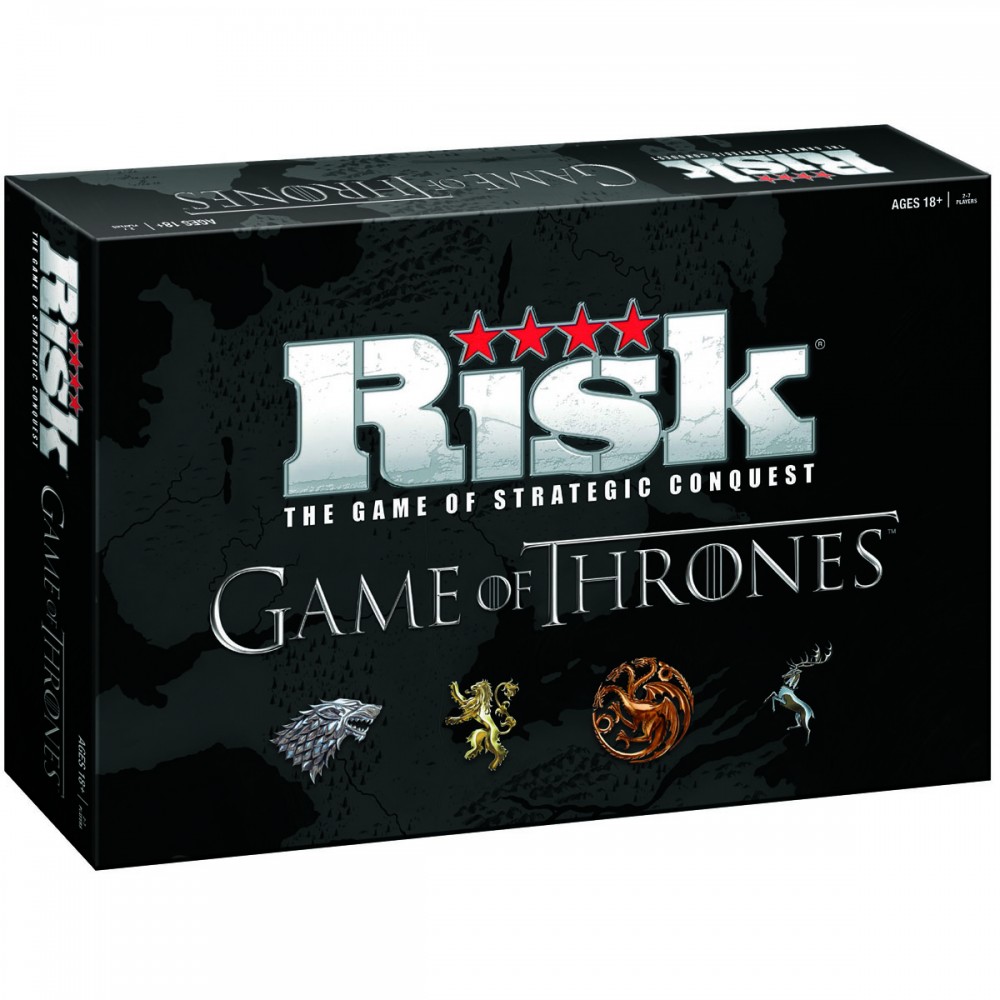 RISK Game of Thrones represents one of the newer acquisitions for the long-standing RISK board game franchise, and a near perfect symbiosis of a classic game with one of the most popular TV shows ever. If you are desperate to dominate the 7 Kingdoms, keen to become King of Westeros, or just looking to put your friends to the sword in your merciless quest for domination, then you’ve found the perfect RISK Game.

Working in tandem with HBO to develop the product, RISK Game of Thrones takes the best elements of the TV show, including all the characters you know and love (and some you love to hate), and puts them neatly in your hands. Combined with gorgeously rendered miniatures, a faithful representation of the world map, and the minute attention to detail as to what makes Game of Thrones so popular, this version of RISK has true universal appeal.

‘I Drink And I Know Things’: RISK Game of Thrones Overview 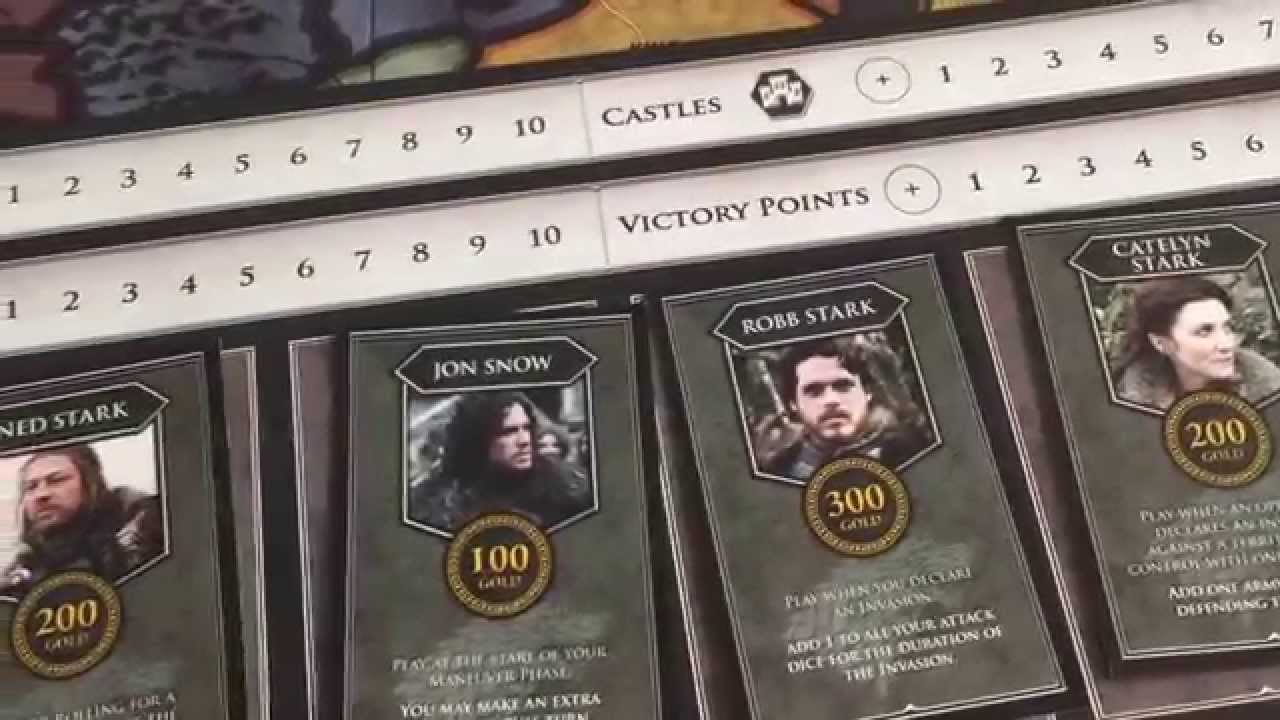 Spanning two continents, Essos and Westeros, RISK Game of Thrones allows games between everything from 2 to 7 players battle it out for supremacy. All the major houses from the show, you’ll be pleased to know, are represented: Stark, Lannister, Targaryen, Baratheon, Tyrell, and Martell, but curious also is the inclusion of a mystery, game-specific 7th. The Ghiscari are the representation of Daenerys’ mortal enemies, the masters of Slaver’s Bay, and provide an adequate foil for her in Essos as part of a 2-player mode.

The standard edition, skirmish, will be familiar to even the most casual fans who play RISK, as players build armies, roll dice, and take over one another’s territories for victory points. But in including extra cards and rules, RISK Game of Thrones also has a fascinating “Dominion” mode which will satiate the hunger of any player looking to get more into the political intrigue aspect of the show. “World At War” takes this further, including both continents and upping the number of players to 7.

‘You Win Or You Die’: Rules and Gameplay

As mentioned before, Skirmish is the most basic form of gameplay. It’s everything you love about the vanilla version of playing RISK, dressed up in Game of Thrones cosplay. Charmingly, there are some very Song Of Ice and Fire-style variations to this though – instead of just capturing territories, one must also capture ports and castles.

At the beginning of the game, every player gets the same number of territory cards (from The Wall all the way down to Dorne), and must place armies in each territory. Then follows the standard phases, namely: Reinforcement (and trading in territory cards for various bonus armies), Invading (and rolling the dice), Movement, and Drawing a Territory Card (if you have successfully captured a territory that turn).

In a somewhat unique twist, you can also invade across the sea. If you hold a port, you can attack any other port on that same coastline (and be attacked!) meaning you can never be too cautious in leaving yourself exposed. 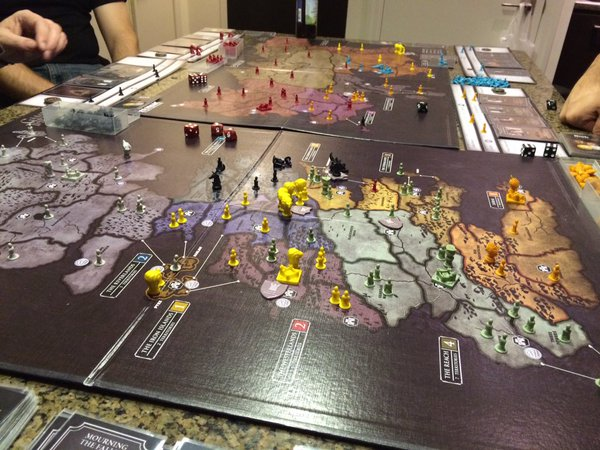 The most notable difference is the end game phase. Somewhere within the reshuffled deck of territory cards lies the card ‘Valar Morghulis’ (aka ‘All Men Must Die’). When this comes into play, every family dies apart from the player who holds the most aforementioned territories, castles and ports, who then becomes in the winner. The addition of the random element means you can never truly know who will be on top when the smoke clears.

Undoubtedly the most interesting aspect of playing RISK Game of Thrones is the addition of the Dominion mode, which requires around 6-7 people to play properly (and if you want to play across the entire world). In order to make the game represent the plot-driven nature of the show, there are a lot of additional features. For instance, territory cards can be traded in for armies but also for gameplay assets like favourable dice rolls. Also new are further Objective Cards, and the Seats Of Power, which function as sort of capital, and must be retained (or re-captured) to win. 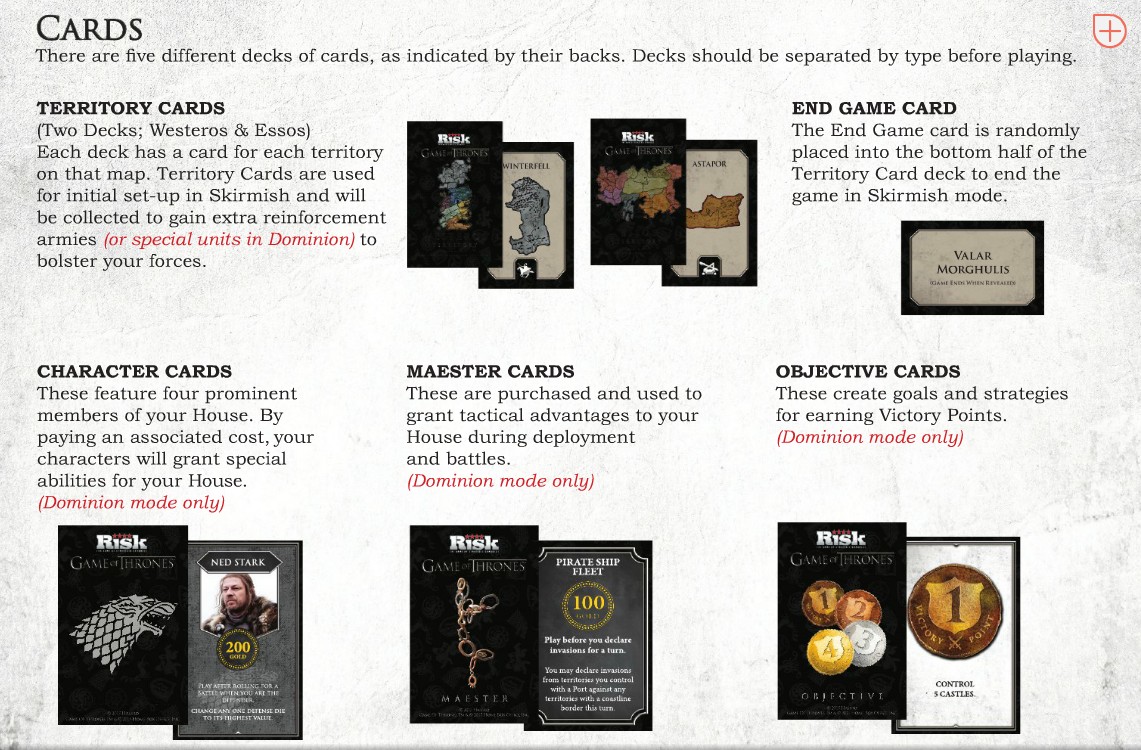 Gold represents a driving resource. With this gold (which you can get from holding ports among other things), you can buy special cards and abilities. One of these cards is the Maester card, which are powerful ‘special’ abilities that can snarl up an attack from even the largest army, providing a player with any number of temporary special abilities.

Paying gold also activate the Character Cards, welcoming familiar faces of the show (divided along house lines, of course) into play, and providing everything from an additional defence die (provided by Stannis Baratheon), to the ability to look at the top two cards of the deck and discard one (Tyrion Lannister).

Small quirks like this, while paying homage to the spirit of the show, also mean that a player must work more tactically than in the vanilla skirmish version of the game, as having the biggest army no longer guarantees an easy win. Indeed, the correct cards, played at the right time can really turn the tables.

‘Power Is A Trick’: Pros and Cons of playing RISK Game Of Thrones

Perhaps the most wonderful and most notable aspect are the miniatures that come with the game. Stunning rendered, each one is as true to the major houses as possible, doing a fine job of representing each sigil. 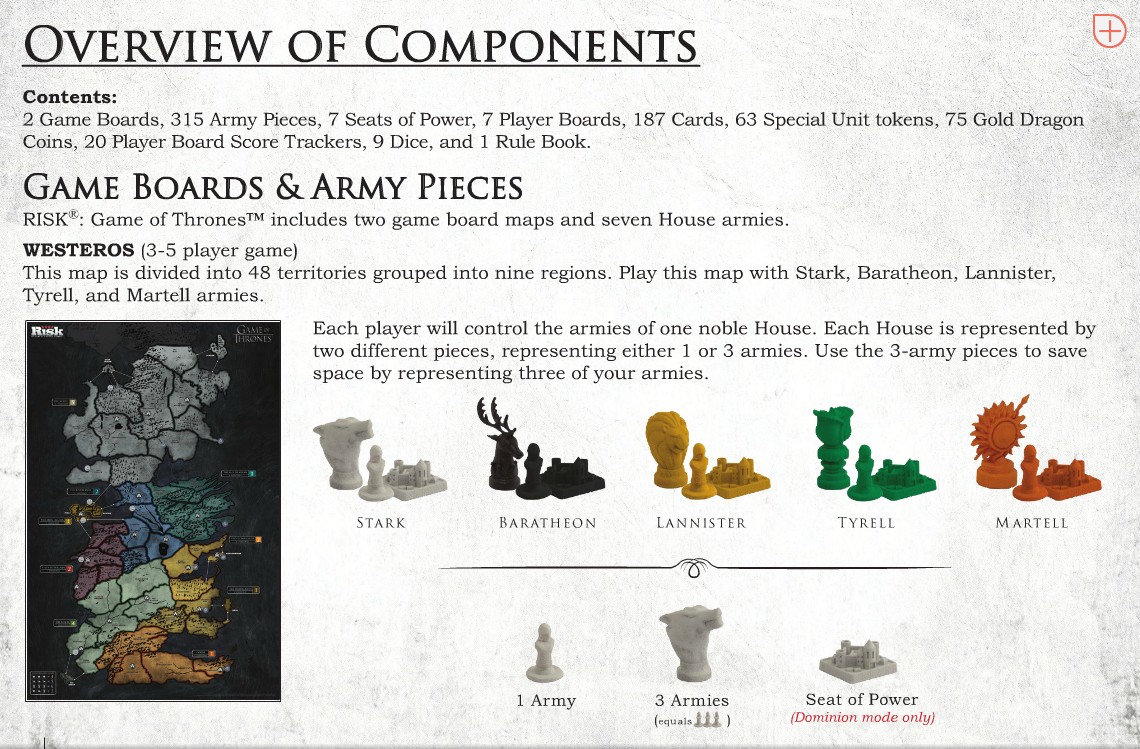 Some complaints have been made, including given the size of the board, you do not receive enough playing pieces to amass a significant enough army across the whole world if needs be. Colour schemes are also a little similar in certain areas, and given the intricacy of the map (which holds a lot of amazing detail), it can be sometimes hard to see where some territories begin and others end. Perhaps they could have stretched the map to fill right to the edges of the board, and defined a few armies a little better (maybe with some more stand out colours).

Any Game Of Thrones fan worth his or her salt is going to want to play the most accurate representation of the TV show they love, and the Dominion feature allows them to do that. The nature of Dominion, as well as the special cards and characters demands that you not just aim towards having the biggest army, but rather world tactically. But because of its relative complexity, and the fact it needs upwards of 6-7 players to run, be ready for the game to span a whole evening – though you might be having so much fun you won’t notice or care. 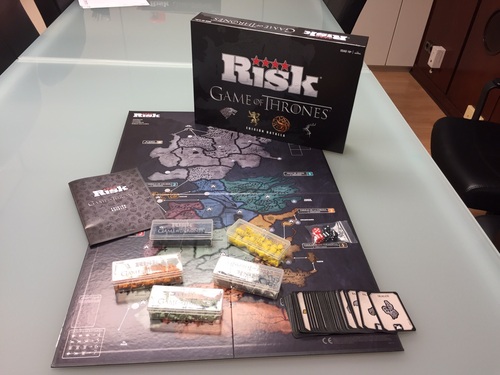 RISK Game of Thrones is a very fine adaptation of a TV show. In starting with the basic mechanics of how to play RISK, they have added a lot of unique strategy to maintain the flavour of the show, while being easy to learn all the same.

As a strategy game, it has all the makings of a classic RISK game. With the licenses from HBO and the inclusion of favourites like Tyrion, Brienne, and more, this version of RISK is sure to be a hit amongst the most avid Game of Thrones watchers and RISK board game fans alike.

Just in case you were interested, I’ve added some links.